Finding the right goat hay feeder is important since it can not only reduce hay waste but also minimize health issues that come with when goats eat off the ground.

In this post I’ll cover why you should be using a hay feeder, factors to consider when choosing a feeder, and our favorite hay feeders we use on our goat farm.

Why you should use a hay feeder

While it can be tempting to not use a hay feeder, especially when you’re just getting started with raising goats, I’d encourage you to take the time to find the right hay feeder for your farm and ranch.

Here are three reasons why you should use a hay feeder:

Anyone who raises goats knows they are notorious hay wasters. Using a hay feeder will help reduce how much hay is wasted. However, not all hay feeders are created equal when it comes to minimizing waste. It is very possible with a hay feeder you may still find your goats are wasting a lot of hay.

Feeding goats hay up off the ground in a hay feeder will also reduce the risk of goats infecting themselves with parasites, coccidiosis, or other health issues.

However, goat hay feeders that have wider openings will still allow for excessive hay waste. And, goats, especially kids, may end up eating that waste off the ground. This can possibly lead to health issues with kids, who typically have lower immune systems since they’re still growing.

When feeding goats large hay bales, such as round bales or large squares, without a hay feeder you run the risk of having bales collapse on goats, adults or kids. This is a risk you don’t want to take.

Even though buying the right goat hay feeder can be costly, in the long-run you’ll save money because of the reduced hay waste. This means you actually have more hay to feed your goats.

When we use our collapsable style panel bale feeder as compared to using no feeder, I’ve noticed a considerable difference in waste.

How to choose the best goat hay feeder

When choosing a goat hay feeder you’ll need to consider the context of your farm, as well as when and how you’ll feed the hay to your goats.

Know the needs of your farm

It’s possible you may need to have different feeders for your goats depending on the situation. For example, when we feed hay during kidding season, we use an individual hanging feeder in kidding pens. However, during the winter months, we are using a collapsible style panel feeder with round bales.

Evaluate the functionality of the feeder

When deciding on a feeder style also consider:

There are a lot of goat feeder options to choose from. You’ll find better success for feeders designed specifically for goats or sheep over generic all-livestock hay feeders or ones designed for cattle.

Here are a few examples of the types of feeders you might find:

How many hay feeders do you need?

You may need multiple hay feeders, depending on how many goats can eat at a feeder at one time. While your goats may not all be eating hay at the same time, you’ll want to make sure feed is accessible for all animals.

Since goats are herd animals there is usually an existing hierarchy within a herd. This means, younger animals, weaker animals or kids may stay back when the rest of the herd eats or even decide to pick through old hay residue. This can lead to unnecessary health issues.

On our farm, we use collapsible panel-style hay feeders with our goat herd throughout the winter months while we feed round bales of hay. This style goat feeder is my favorite for several reasons:

During kidding season we use an over-the-wall style hay feeder to feed slices of small squares of hay. We still get quite a bit of hay waste. I’m still looking for a better option for stall feeding hay where there isn’t as much waste.

Do goats need a hay feeder?

Yes, goats need a hay feeder. Without a hay feeder, you’ll greatly increase their risk of being infected by parasites, coccidiosis, or other health issues. Even “basic” hay feeders with wide openings will cause excess hay to drop to the ground, which is still eaten by the goats.
A hay feeder also will save you a lot of money in the long run since goats are horrible hay wasters. The collapsible style hay feeder we use has made hay waste hardly an issue on our farm.

What about DIY goat hay feeders?

Yes, DIY options for goat hay feeders can work, but you’ll want to make sure you’re looking at ways you can reduce hay waste instead of just saving money on building your own. You could build a collapsible panel-style feeder if you’re good with a welder or have a local welding shop.
Premier 1 Supplies also has decent plans for a DIY bunk-style feeder, which we’ve used inside our barns. 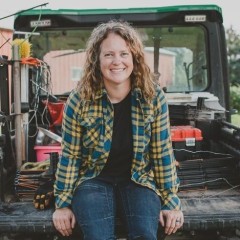